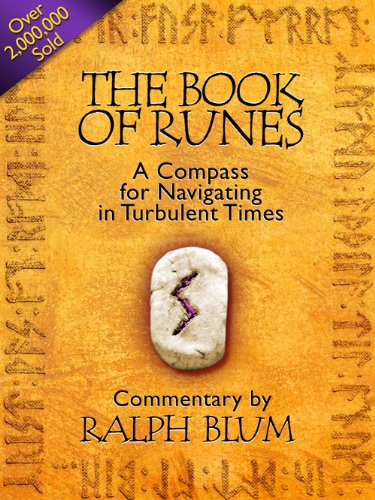 Product prices and availability are accurate as of the date/time indicated and are subject to change. Any price and availability information displayed on [relevant Amazon Site(s), as applicable] at the time of purchase will apply to the purchase of this product.

The publication of The Book of Runes (over two million in print) marked the return of an ancient Oracle last used in the Middle Ages by Viking navigators to set their courses under cloudy skies. In our time, the Runes Oracle serves as a compass for conduct, a means of determining the “true north” of right action in any challenging situation. According to anthropologist Margaret Mead, for an Oracle to endure, it must be of service to at least three consecutive generations. We are now hearing from the “Hogwarts Generation”– the grandchildren of those who began consulting the Runes Oracle in the spring of 1982. And if you look closely, it appears that the scar on Harry Potter’s forehead is a Rune! Which Rune? The lightning bolt, s, the Rune of Wholeness and Healing.

The Book of Runes is something very special: a part of the ancient past and, perhaps, a part of your future…

Based on a tradition over one thousand years old, the Runes are seen by many as a contemporary Oracle and collectively, have established themselves as a remarkable aid in practical decision making.

A huge success with over 2 million copies sold worldwide, since its original publication in 1983, The Book of Runes has proved to be a modern classic. For this first edition of the E-book of the work, Ralph H. Blum has expanded and refined the runic system, making the Runes one of the most profoundly useful self-help tools of the new century.

Crystals, Dowsing, Runes and the like can and are used for self help, self healing and personal development -the following articles are a powerful resource and will help in those areas too.

For More Steampunk items - Pat the little Octopus on his head